The exercises of practical life are formative activities. They involve inspiration, repetition, and concentration on precise details. They take into account the natural impulses of special periods of childhood. Though for the moment the exercises have no merely practical aims, they are a work of adaptation to the environment. Such adaptation to the environment and efficient functioning therein is the very essence of a useful education.
[Maria Montessori in What you should know about your child, p114]

practical life: the heart of the montessori method

Some parents have difficulties to appreciate teaching chores to their children. Why teach a four-year-old to clean the table when it's very likely that he makes an even bigger mess than he was asked to remove?

If you still think that you rather have your nanny do the work instead of letting your child give a try, then remember that repetitive household chores train concentration, i.e. the trait most needed for later intellectual work and by psychologists considered as most conducive to success in adulthood.

Findings of researchers like AngelaLee-Duckworth do echo what Dr. Montessori wrote:
"Discipline is an aspect of individual liberty, an essential factor of success in life."

Sadly, not so many teachers, and even fewer parents see that these traits are chiseled into a child’s character early on in a playful manner. the origin of the montessori method

Maria Montessori developed her pedagogical anthropology in the early 20th Century when the urbanization was at its peak in industrializing Italy. Thousands of Italian peasants streamed into Rome to seek a better life. They ended up spending most of their waking hours of in manufacturing facilities while their children were left to themselves under desperate conditions.

The Roman district of St. Lorenzo where Dr. Montessori established the "Casa dei Bambini”, her first school, was a carbon copy of what Charles Dickens described a hundred years earlier in his London based novel Oliver Twist.

Montessori put all her efforts into getting the unfortunate children of that time away from the infested streets, save them and educate them in a clean and orderly indoor environment.

Things have changed, though. Most infectious diseases have been cured. Working hours have been significantly reduced. In most countries, schooling is compulsory until 9th grade.

The incentive to stay indoors comes now from our affection for screens, from TV to smartphones.

The Montessori Method and related Montessori Material have been by wide and large untouched and its focus remains on the indoors.

GreenSteps instills the Montessori Method with new life. Our classroom is outdoors. Our lead teacher is nature.

As children learn to care for and develop respect for their environment, they soon understand that the environment is greater than just their immediate surroundings.

Activities as recycling help children realize that the environment extend into the local community and beyond. Such learning is in particular in Fareast Asian societies of tremendous importance because the family system limits social awareness building beyond the immediate family.

Some parents have difficulties to ask their children to collect the waste others have thrown away.

Why teach a four-year-old to pick up plastic bottles, when it's very likely that there will be more the day after? What difference does it make?

Our planet suffocates in a flood of plastic products. We manufacture them with machines at a breathtaking speed, but they end up in the environment where plastic waste needs to be removed by hand.

Teaching children early on that we need to respect the environment and be mindful of what we consume is an important lesson in our modern world. As Dr. Montessori wrote:

"Such adaptation to the environment and efficient functioning therein is the very essence of a useful education."

For two years we have been guiding small groups into the water bodies of Jinzereservoir on kayaks and stand up paddles. We teach children in a playful but repetitive way to remove trash from water bodies.

They are pirates looting the village!

Last weekend I had four families with children aged 3-6, the period which Montessori called “The Absorbent Mind” because they learn faster than at any other stage of human development.

I observed the usual pattern repeating with our little pirates. They are excited to get tweezers in their hands and want to pick up whatever comes into their way. Once they are in the kayak their focus is undisturbed and whatever piece of trash they spot, it needs to be captured. 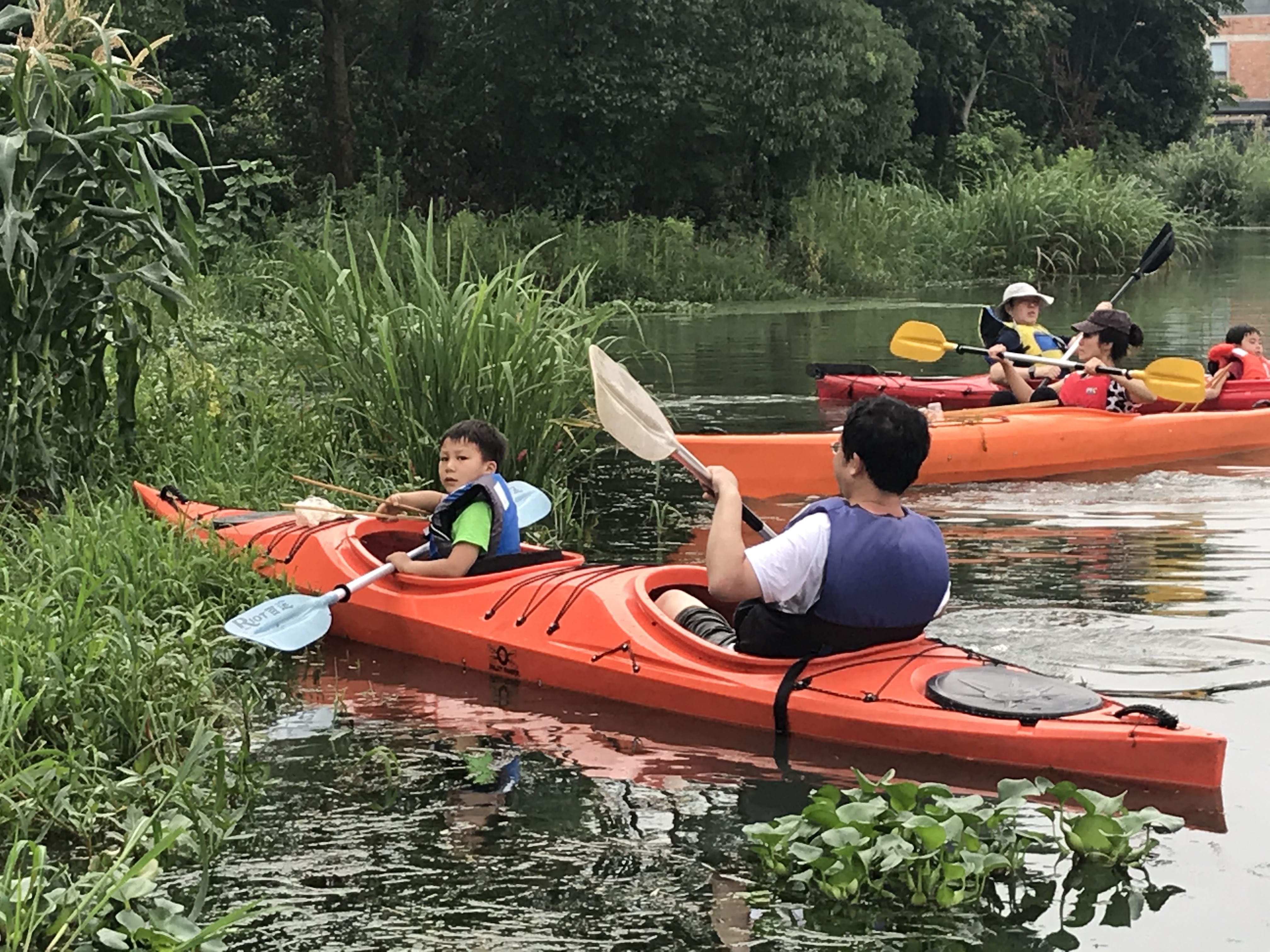 The parent and the child need to be aligned to make most out of this activity. The parent steers the kayak while the child is busy fetching floating debris. Both maneuvering the kayak and picking up objects are complicated and quite exhausting tasks. Parents need to train their gross motor skills while the children need to make considerable efforts to lift sometimes heavy objects out of the water and into the boat.

Its fascinating to notice that children, supported by their parents, do not lose focus for the entire duration of the activity. They stay on target for two hours or more: what an extraordinary attention span!

We used for this activity the first time our bounty boat: a small, blue plastic vessel which one of the Nature Guides pulls behind her kayak. Participants drop their bounty into the blue vessel and make the activity a collective effort to loot as much as possible. 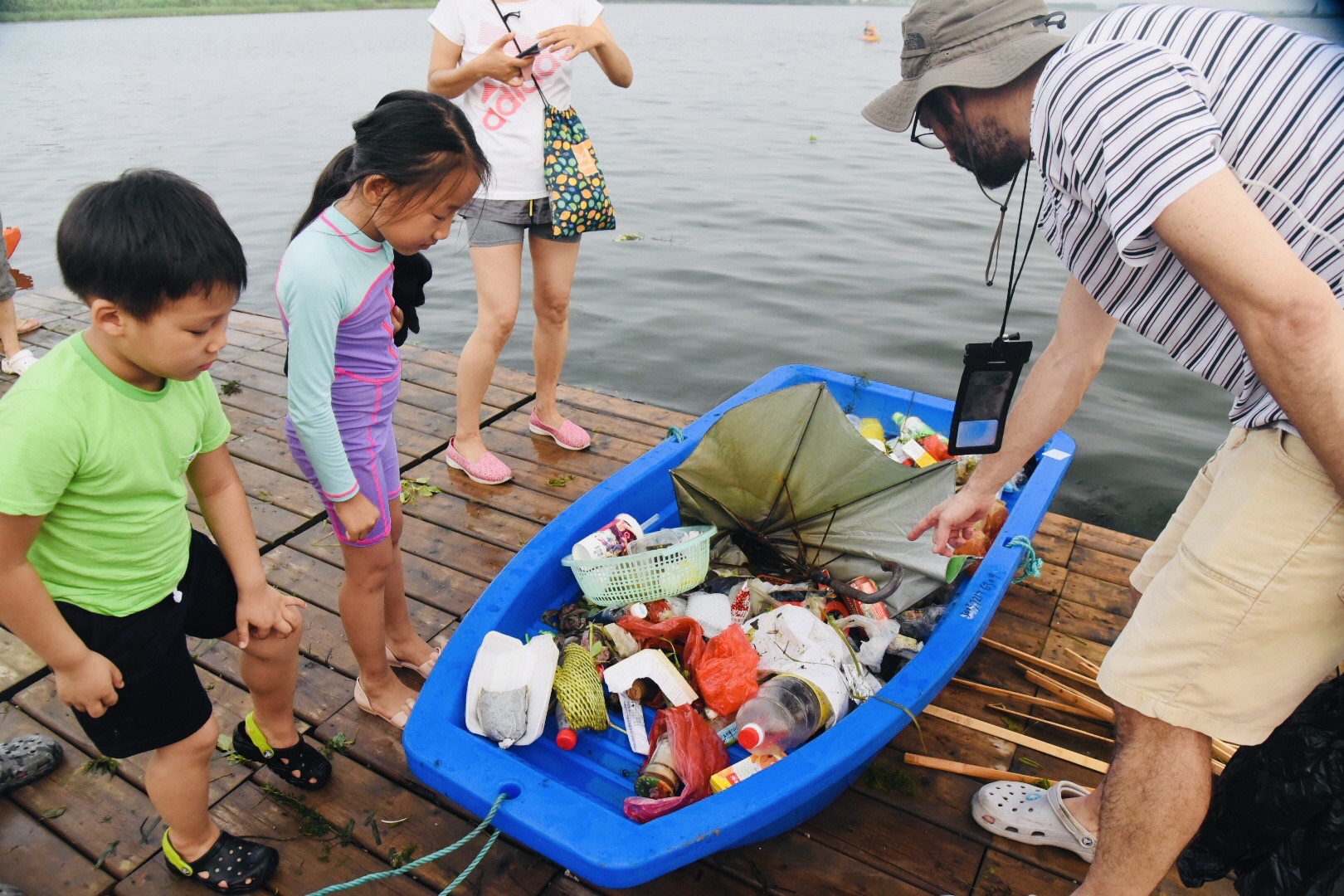 It was 15 kg of floating debris which we found during this activity. Ina sharing round, we stood around the boat and I asked the children to pick one piece of trash to explain to the others what it is and who the person might have been who dumped it into the water. Even the shy ones came up with a good story.

Still much trash to be looted, so join us on one of the next events and become a Plastic Pirate! 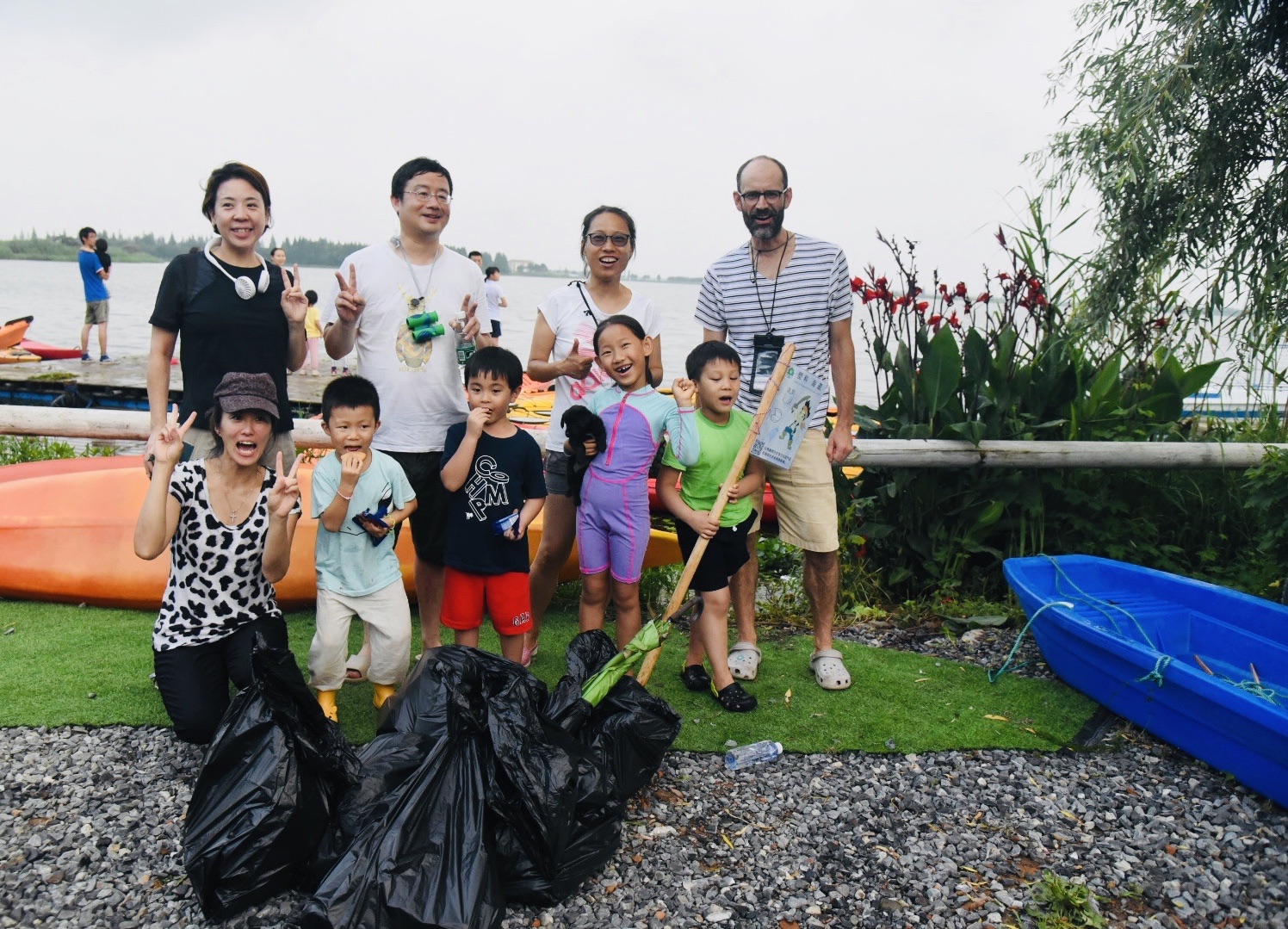 The Global Education Week (GEW) common goal is sustainable development. Our branches in China and Europe decided to promote a sense of global citizenship across the Eurasian continent: let's go wild and join our Nature Journal challenge from November 30 to December 6!

From Ghana to China for study, a young engineer ended up being "the man on the chair", helping all team members not getting lost in their digital tools and assisting to implement efficiency driven IT solutions. Last but not least, always with a smile on his face. Get to know our Richard!

Feeling home in a corner of greenery

Many things could be learned in a classroom, but there are many more that need to be experienced first-hand. Autumn is Nature’s generous season, where plants and trees share their fruits for harvest. All the wildlife is active in collecting reserves for the cold months to come. It is a time for celebration and merriness, to enjoy the abundance and colorful display of life.